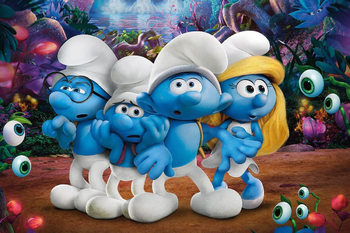 The Smurfette Principle is in action when the cast is made up of a group of males and exactly one female. This can occur even in works with Loads and Loads of Characters, so long as each sub-Ensemble (of five or more) contains only one female character. Adding a second female to the ensemble creates a related trope. With the relatively few female-aimed works, contrasting the sheer volume of works that are aimed at males, it stands out that the demographics of fiction shows a ratio of female to male characters much lower than Real Life.note which, according to statistics

◊, is roughly equal, with even slightly more females in developed countries

Named after Smurfette from The Smurfs, the trope was first coined by an article by Katha Pollitt in the New York Times printed April 7, 1991, called "The Smurfette Principle"

. The article focused on the trope as it applies to young children, and discussed the negative message: males are individuals who have adventures, while females are a type of deviation who exist only in relation to males. See also Margaret McGowan's Reel Girl

Compare The Bechdel Test, Two Girls to a Team, and Two Guys and a Girl for similar critiques of female:male proportions in fiction. Affirmative Action Girl is a common way of averting the trope, sometime preemptively, sometimes as a reaction to the aforementioned criticism. See Chromosome Casting when there's zero members of the opposite sex present not only amongst the main characters but in the work itself (maybe except for in the background). This is also Distaff Counterpart to The One Guy. Subtropes include Never a Self-Made Woman (women cannot achieve anything without a male mentor or counterpart), Smurfette Breakout (the Smurfette character becomes popular on her own), Starring Smurfette (Smurfette is the protagonist), and Territorial Smurfette (another female is added to the show and the original Smurfette reacts negatively). Often, the one girl is a princess for economy's sake. Contrast Gender-Equal Ensemble and Improbably Female Cast. For the Music equivalent, you would have Male Band, Female Singer or Female Rockers Play Bass.

Interestingly, this trope does not actually apply to The Smurfs, as a second female smurf was added to the cast in 1985 and more have been added since.

She's the only female Dark Purveyor. This is largely due to being modeled after Janis Joplin.

She's the only female Dark Purveyor. This is largely due to being modeled after Janis Joplin.