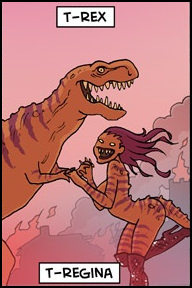 It's either this or we put a bow on her.
"I've always thought it a bit odd that the male orcs, trolls, and undead are all hunched, twisted monsters, and the females are all basically just discoloured human hotties with bad dentistry."
— Zero Punctuation on World of Warcraft
Advertisement:

Sexual dimorphism refers to physical and physiological differences between the sexes, which, in the case of fictional fantastic species, tends to be very pronounced. In many media geared towards men, males of a species are depicted in various ways, but females tend to be depicted as feminine humanoids whose secondary sex characteristics (such as breasts, butts, and body fat) tend to closely resemble those of humans. Coincidence, obviously. Rarely do female members of sapient alien species display more realistic traits (resembling those of nonhuman species on Earth) such as being larger than the males, lacking prominent mammaries, or drinking blood while the males are vegetarians.

This is because male characters being bestial and inhuman can still fulfill a power fantasy, while attractive female characters can still be a source of fanservice. That way both sexes cater to a male audience's interests.

Subtrope of Bizarre Sexual Dimorphism, which is for all cases where male and female beings are radically different in appearance, and of Men Are Strong, Women Are Pretty, which is for when male design elements are geared towards toughness (in this case "monstrous" traits that are representative of their supposed species), while female design elements are geared towards femininity (or in this case, Rule of Sexy).

Sister Trope to Ugly Guy, Hot Wife and Beast and Beauty; this trope is similar to those appearance dynamics but applied to all members of the same species. Related to Cute Monster Girl, when female monsters are drawn in a sexy, anthropomorphic way and Humanoid Female Animal, which covers artistic representation of female anthropomorphic characters. In science fiction, the females of a Sexily Dimorphic species are often Green Skinned Space Babes. Tends to be an Always Female trope. May result in Non-Mammalian Mammaries. For particularly egregious cases of this, see Only One Female Mold.