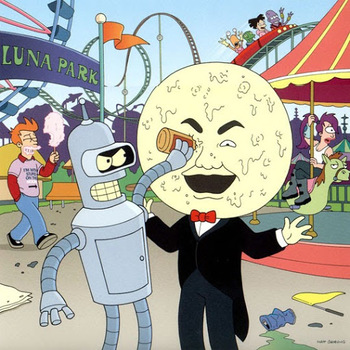 Now that Fry, Leela, and Bender have been hired by Planet Express, the Professor assigns them their first mission: deliver a crate of toys to the Moon, which, in a thousand year's time, has become a cheesy, Disney World-style theme park. While Leela enjoys it, Fry wants to experience the moon the way Neil Armstrong "...and those other brave men no one's ever heard of" did, which leads to trouble with a space redneck and his robot daughters.

Bender: Yeah, well, I'm gonna go write my own recap page! With blackjack! And hookers! In fact, forget the page!