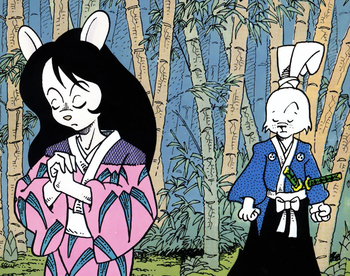 A subcategory of Tertiary Sexual Characteristics and Long Hair Is Feminine, this is when female anthropomorphic animals have human-like heads of hair while their male counterparts do not. So while males are free to have what looks like a "bald" head (or at most, tufts of fur on their head indicating hair), females must have a more "obvious" indicator of their gender (the other option would be hiding the perceived "baldness" with hair accessories à la Minnie Mouse). Lions are probably the most common exception to this, since the male's mane is so universally known that switching it around would just look weird (although females with manes and males without them actually can exist).

Is the little sister trope to Non-Mammal Mammaries and a subtrope of Humanoid Female Animal and Animal Gender-Bender. See Animal Facial Hair and Furry Baldness for male animal hair tropes.