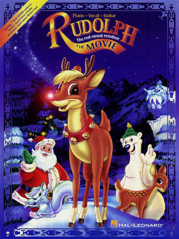 In 1998, GoodTimes Entertainment adapted Rudolph the Red-Nosed Reindeer into a movie (unrelated to the Rankin/Bass Productions adaptation of the same name). It is a Coming-of-Age Story that centers around Rudolph's dream of becoming a Flyer- one of the heroic reindeer who pull Santa's sleigh- and triumph over Arrow's bullying. Eventually this bullying escalates to the point where Rudolph runs away from home.

Unfortunately, the North Pole is experiencing a terrible blizzard, and it threatens not only Christmas, but Rudolph's life...

GoodTimes later made a sequel film, Rudolph the Red-Nosed Reindeer and the Island of Misfit Toys, however it was an All-CGI Cartoon sequel to the original Rankin/Bass specials.

Rudolph the Red-Nosed Reindeer: The Movie provides examples of:

Rudolph and Zoey sing about how far apart they are and wish to be reunited some day.

Rudolph and Zoey sing about how far apart they are and wish to be reunited some day.