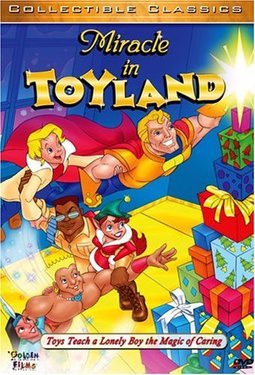 Side note: the "miracle" the title is presumably referring to takes place in a snowy mountain and not in Toyland.
Advertisement:

Miracle In Toyland is a 2000 animated film by Golden Films and GoodTimes Entertainment. It is notably one of their few movies to be an original work instead of a mockbuster.

The story centers around a lonely boy named Jesse, whose father is a distant military man sent out to work on Christmas, and whose only friend is his cousin, Gabriella. After accidentally upsetting her, as well, he ends up alone in a toy-store, where he ends up becoming friends with the living toys. When his father's plane crashes on a mountain, he and the toys set out to save them.