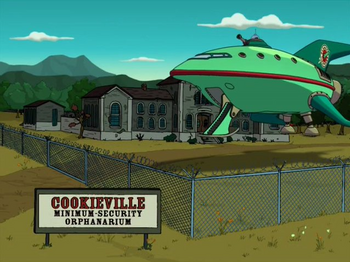 During the twentieth century, the majority of orphanages in most industrialized countries were shut down, and while a few private orphanages and similar institutions still exist here and there, nowadays most orphaned children in Western society simply end up in foster care or group homes.

But in fiction, traditional orphanages are often abundant in settings where they logically shouldn't be. Most developed countries no longer have orphanages, but a few (like Japan) still do. Either way, orphanages still appear in fiction for the same reason asylums do: they invoke a certain image to people. Orphanages full of sad kids just have more of an appeal, apparently, than "this kid got put in foster care". This trope also often results in the foster care system being depicted more negatively than an Orphanage of Love.

Some possible aspects that might play into this trope include (1) portraying a binary choice of orphanage or adoption (no foster care or any other possibility besides full adoption, even if options like foster care are emphasized in the real-world setting the story supposedly takes place in), (2) portray adoption as if it's just a matter of adoptive parents walking in and picking out a kid with minimal (if any) vetting or systems to protect the children's interest (i.e., as if it's as simple as adopting a pet from a shelternote Even many shelters have extensive vetting processes, which also are ignored in fiction), and/or (3) have the resident kids used for child labor.