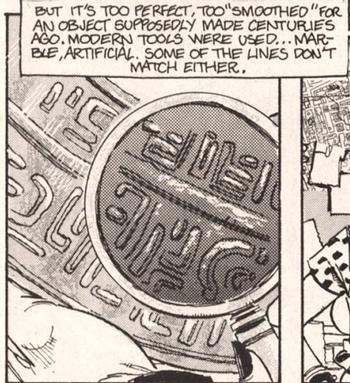 "It's in ballpoint. They weren't big on ballpoint in '43."
— Harry, Angel Heart
Advertisement:

An Anachronistic Clue is any item or aspect of an item that cannot actually come from the time period in which it was supposedly produced or found. Most dictionaries cite the Greek roots of the word "anachronism" as meaning "against time" or "backward time". In realistic settings, such clues are pretty definitive when the investigators are trying to establish whether or not an item is authentic, and they're most often involved in examinations of historical documents, artifacts and works of art. Yet even in works which employ Time Travel, an object that "doesn't belong" is a big hint that something's amiss.

Sometimes the problem is a matter of substance. A purported Renaissance painting might be painted with a pigment that wasn't invented until centuries later, or a dated document could be written in an ink containing a synthetic compound that hadn't been invented before that date. Alternatively, a document or inscription might refer to something that either wasn't known at the time (talking about "photographs" or "photography" in a Regency-era letter when the word was coined in Victoria's reign — 1839, to be precise), or wasn't called by a specific name at the time (say, using the phrase "World War I" in a document or on an item purportedly from the 1920s since back then it was known as "The Great War"). The matter may be as simple as the physical placement of an object: biologist J.B.S. Haldane supposedly said "fossilized rabbits in the Pre-Cambrian" (mammal fossils in a layer geologically dated to a time hundreds of millions of years before mammals existed) would disprove the theory of evolution note  Not that such a discovery would actually disprove evolution so much as prompt a reassessment of the modern understanding of the process.

These clues might be incredibly obvious (visible to the unaided human eye) or require some kind of analytical test (chemical analysis, radiocarbon dating or something of the sort) to be discovered. This fact makes this trope a versatile plot device: creators can use it early on, such that the story is about finding the forger, or as a Twist Ending in which the valuable object everyone has been wanting turns out to be a fake.

Over-reliance on this may result in Conviction by Counterfactual Clue. "The First World War" was being shopped around as a good name for the conflict at least a month before the Armstice was declared - it's just something far more likely to appear in personal letters than award ceremonies or service records. If the anachronism is a mistake by the creators rather than an intentional clue, that's Artistic License – History instead.