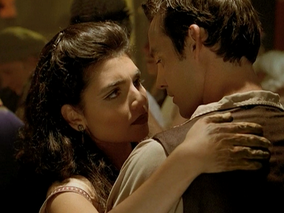 Sunnydale High is hosting a cultural exchange program and each student is matched with an international exchange student that will live with them for two weeks. In preparation, Buffy's class take a field trip to a museum to see an Inca exhibit. Buffy's mom, Joyce signs Buffy up for the program and Buffy finds out the student she will be rooming with will be a boy named Ampata. Xander becomes jealous after finding out.

After everyone leaves the museum, one of the students tries to steal a ceramic being held by an Inca Mummy but instead he breaks the seal. Instantly, the mummy is revived. She's a princess and the unlucky student is pulled inside her coffin with her.

That night after hearing of something suspicious happening in the museum, the Scoobies decide to investigate. They sneak into the building and discover a man wearing traditional Incan clothing wielding a sword. Initially, the man attacks them but disappears. Willow notices that the supposed 500-year-old mummy was wearing modern braces on his teeth. The original mummy had sucked the life out of the student and escaped.

Buffy remembers she is late to pick up the exchange student from the bus station and rushes there. While she's on her way, the mummy lures the student away and sucks the life out of him, restoring her own beauty and youth. When Buffy arrives, the now youthful girls poses as Ampata and everyone assumes that the information on the forms was wrong about the student being a male. Xander is immediately smitten with her and the two begin flirting.

At school, Giles is trying to decipher markings on fragments of an Incan seal. He asks Ampata to translate it for him. She reluctantly tells him that a 16 year old girl was chosen to die to save her people and a bodyguard was chosen to protect her from straying from that path. She then tells Giles that he must destroy the seal permanently, implying that if the seal were reassembled it would impose a threat to her.

Meanwhile, the bodyguard discovers the princess is gone and the students from the school have taken the seal. Searching for it, the bodyguard runs into Ampata and confronts her about it. She runs from him but eventually tells him that she wants to live and that she shouldn't have to give up her life at such a young age. He tells her that it's her duty and that she's killed innocent people now. She grabs him to kiss him and sucks the life, remaining young and beautiful.

Back in the school halls, Xander is smitten and completely oblivious. He asks Ampata to the dance to which she accepts. Willow is crushed as Xander is yet again with another girl and continues to only see her as a friend and not in a romantic light.

Back at Buffy's, Ampata's trunk has arrived from the bus depot and as Buffy starts to open it the fake Ampata tells her not to bother. She distracts Buffy by talking more about the Inca mummy's ceremonial seal. The camera briefly shows that inside the trunk is the mummified corpse of the real Ampata. 'Ampata' talks eloquently of the princess' suffering and how it was difficult to obey her duty at the age of 16; something Buffy relates to. She laments that the princess was chosen and each of the girls think about having the weight of being burdened with saving people's lives.

The dance is a costume party in which students are supposed to dress like people from other countries. Ampata dresses in her flattering Inca princess clothing and Xander can't take his eyes off her. Willow goes dressed as an Eskimo where everyone ignores her, except Cordelia who insults her. However Willow doesn't realise that Oz, bass player in the local band has been watching her. As Xander and Ampata share a romantic dance, Ampata's hand starts to return to its mummified state. She runs from Xander and grabs a student, sucking the life force from him. Xander arrives just in time and the student, Jonathan runs away.

Back at Buffy's, Giles tells her that the bodyguard's mummified remains were found in the school bathroom. They rush to Ampata's trunk to find out more about her and discover the real Ampata's mummified corpse. Giles heads to the museum to find out more about the ceremonial seal while Buffy runs to the dance to save Xander from the deadly kiss. Ampata decides to run back to the museum as she cares too much about Xander to kill him. She grabs the seal from Giles and destroys it. Buffy rushes to save Giles but they both end up unconscious inside the mummy's sarcophagus. Willow arrives and the deteriorating Ampata tries to suck life from her. Xander shows up and says that if she must feed off anyone, it should be him. The quickly dying Ampata is willing to do this despite her feelings for Xander. Buffy manages to get out to fight her and save Xander. Ampata weakens to the point of returning to mummy form and when Buffy grabs her, she breaks down with pieces scattering the floor.

The next day, Xander claims to have bad taste in women. Buffy assures him that Ampata did care for him but had no other option in the situation she was in. When likening her situation to how Buffy was prophesied to die at the hands of the Master but she fought him anyway, Buffy reminds Xander that he was the one who brought her back.