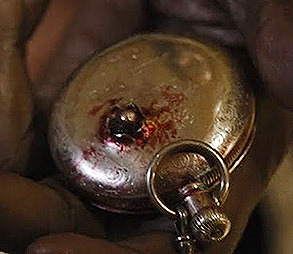 Oh no! Our Hero just got shot! There's a hole in their shirt right over their heart... but what's this? They have something in their pocket? It stopped the bullet! They are saved!

They got a Bible in there? It'll stop the bullet. Ditto for cellphones, and especially lockets; if it contains photographs of beloved ones, expect a large modifier (positive or negative, depending upon the scene) to the attack.

While it may have worked in the days when guns were extremely underpowered (relatively speaking), these days the life-saved-by-sentimental-object trope is discredited; it's rare to find a 21st century example that plays it straight. It's important to note that most real-world examples involve ricochets, spent bullets, shrapnel or other low-velocity projectiles. It's a very lucky break when the round is moving slow enough to be stopped by anything so small and thin as what you can fit in a pocket. Also, pretty much any real-life example of a bullet being stopped by a Bible or other book in the victim's pocket will involve the book being stored in a silver or steel box, which obviously provides more resistance than just paper.

One commonly-used justification is that it's an attempted assassination; silencers only work with subsonic rounds (any supersonic round makes a loud crack as it breaks the sound barrier, which a silencer can only do anything about by slowing the bullet down enough that it doesn't break the sound barrier in the first place) meaning appropriate bullets can thus be rendered nonlethal by many everyday objects capable of fitting into a pocket.

See Bulletproof Vest for things that are supposed to stop bullets.note Some of which in real life, incidentally, are fitted with protective ceramic plates stowed in pockets. Compare Concealment Equals Cover, where the hero is protected by something that isn't in their pocket. If bullets are stopped by an unwilling Mook or bystander, that's a Bulletproof Human Shield. For other uses for books, see Useful Book. For intentional versions with (usually) larger objects, see Improvised Armour. Invariably leads to a Wardrobe Wound.

Colin hands Brittas a water pistol, causing Julie's bodyguard to shoot him. Thankfully, Helen's gift took all of the bullets.

Colin hands Brittas a water pistol, causing Julie's bodyguard to shoot him. Thankfully, Helen's gift took all of the bullets.