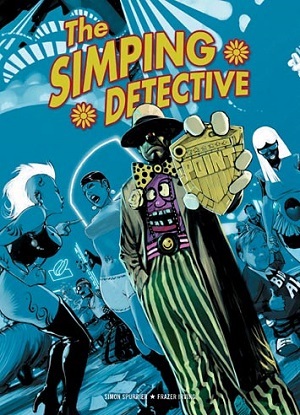 "What's your point?"
"Comes right after the Jack"
Advertisement:

The Simping Detective is a Spin-Off from Judge Dredd, set in the seedy Angeltown, the most dangerous and crime-ridden sector in Mega-City-One. Its main character, Jack Point, is a Wally Squad Judge posing as a private investigator. Jack is a chain smoking, womanising, alcoholic with a penchant for dressing as a clown.

Jack soon finds himself with enemies on both sides of the law in the form of a mob boss known only as The Boss, who runs Angeltown and his own boss, Sector Chief Daveez, who runs his own little operations for profit. Furthermore, there is another organisation that is attempting to make changes in Angeltown, making contact with Jack via the mysterious Miss Anne Thrope.

Tropes specific to The Simping Detective