Theatre / The Yeomen of the Guard 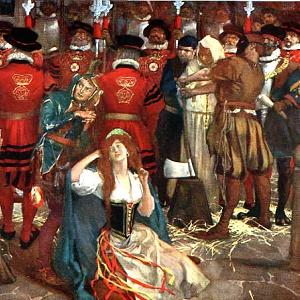 The Yeomen of the Guard, or, The Merryman and his Maid is an opera by Gilbert and Sullivan. Though generally considered a "comic opera," it is notable as the team's most serious work. (Sir Henry Lytton wrote that Gilbert once told him that he had always intended Jack Point to die at the end, but had somewhat modified his intention due to the great comic reputation of George Grossmith, who originated the role.)

The central motif of the drama is said to have been suggested to Gilbert when he saw a Beefeater displayed on the advertisement of a London furniture moving company. His imagination took fire at the picturesque Tower of London setting, and he made a special study of Shakespearean language in order to create the proper feel for the period. The plot-device of the secret wedding may have been suggested by an earlier melodrama, Maritana, itself based on a still earlier French play, Don César de Bazan. However, neither of those sources have the eccentricity of character or the wit, grace, and occasional profundity of Gilbert's libretto, let alone the rich and glittering texture of Sullivan's outstanding score, "over which" (it has been said) "the motif of the Tower broods like a watchful giant."