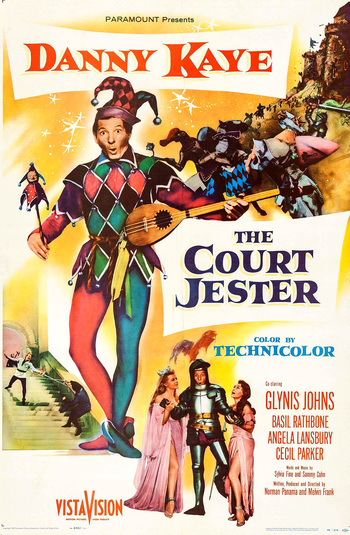 A Stock Character in the Standard Royal Court, a Court Jester is a clown and funnyman who's rarely what he appears on the surface. His nominal role is to entertain the king and his courtiers with jokes, acrobatics, juggling, and pratfalls, while wearing a silly, brightly colored outfit and Happy Harlequin Hat.

The Jester's foolish appearance and demeanor means he's generally laughed at or not taken seriously. Many writers have noted that it's a great cover. No one would guess that the silly and seemingly harmless jester is really a bodyguard, assassin, or spymaster. Due to this reason and a combination of their silly antics with the ability to tell the king things he doesn't want to hear right to his face, the jester is often one of the most common examples of a Non-Ironic Clown still in existence.

As characters, Jesters are anything but straightforward, and usually have some element of The Prankster, Bunny-Ears Lawyer, or Delighting in Riddles to their personality.

It's worth noting that real jesters were the Trope Codifiers for most Clown Tropes. For example the reason modern clowns wear ruffs is because they were popular back when jesters were around, so the jesters started wearing them too, and they have since remained a part of clown costumes. Many techniques of clowning and circus arts have their origins in the craft of the Court Jester.

May overlap with Magical Clown, due to Real Life jesters in The Middle Ages using magic tricks as part of their acts, and Villainous Harlequin. May also overlap with Honest Advisor, especially if they use comedy to criticize the great magnates of the realm. Compare to Court Mage and The Bard; the Court Jester may overlap with either. Also compare Lethal Joke Character. Not to be confused with The Fool, a character who thoughtlessly blunders through adventures yet comes to no harm.

Percy wants to be a court jester and tries out an act for Sasha.

Percy wants to be a court jester and tries out an act for Sasha.