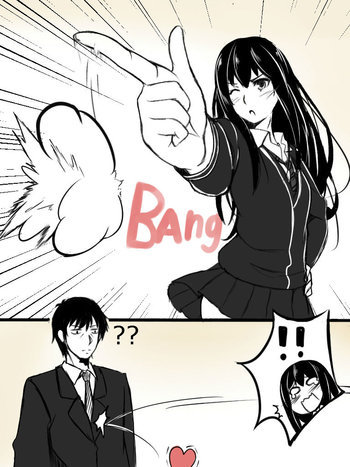 "Oh, hey. You dropped something."
"What does a woman need to do, Harry? Rip her clothes off, throw herself on top of you, and shimmy while screaming, 'Do me, baby!'?"
— Thomas, The Dresden Files
Advertisement:

Love Hurts; it's messy and a mathematical nightmare where only a few can come out happy, never mind unscathed. One of its worst injuries is perhaps the plainest one... pining away at someone because All Love Is Unrequited, and in the end never even holding them because I Want My Beloved to Be Happy.

Then, there are times a deep-frozen love life is not because of Star-Crossed Lovers, the pursued Love Interest being the Master of the Mixed Message or any such thing. It's because the rules of plot and characterization dictate that they not notice the protagonist's overtures and Longing Looks. Bob likes Alice, and he makes several increasingly obvious hints that he's interested, he'd like to ask her out, and wants to be her boyfriend. Alice (though gender reversals are common) will usually be oblivious enough that his stuttering overtures aren't heard or followed up on, and on top is usually blind to Bob as a love interest because she:

Expect Alice to say things like "I wish there were someone out there for me" and Bob to respond with "He might be closer than you think." Of course, she'll think he's being vaguely hopeful rather than literal. In the worst cases, Alice may be actively looking for someone (in general or particular) and just be completely blind to other people's feelings for her, or even already seeing someone (let's call him Charlie), Charlie may or may not be the right guy for her, but that's secondary to her being oblivious to Bob trying very hard to get her attention.

If Charlie is the wrong guy, Bob will win Alice's heart in the end. This is a common consequence of Old Flame Fizzle. If he's the right guy, then expect Bob to either hook up with whoever he was ignoring or suddenly be revealed as a psycho slimeball.

The Matchmaker is particularly prone to this, being used to thinking of love as something she arranges for others, and often tries to hook up Bob with Danielle or Eglantine as just perfect for him.

If Alice really is attracted and doesn't realize it, Tsundere behavior may result, or she may treat Bob as her Protectorate, or ensure that he's fed, or blush furiously at the mention of him, prior to the Love Epiphany. Green-Eyed Epiphany is common.

This is commonplace in the Love Dodecahedron, and is a type 5 in Triang Relations. It also overlaps with Everyone Can See It. It is also prevalent in Yaoi Genre and (especially) Yuri Genre works, where it is often mixed with confusion about one's feelings for someone of the same gender. Compare It Meant Something to Me, where Bob overtly says he loves Alice, but she denies having any feelings. See also Did You Think I Can't Feel?

If the problem escalates, then this can lead to a case of Clueless Chick Magnet. Compare to Chaste Hero, where the character in question is completely clueless about the concept of romance; this one knows things about love and may even have a crush, just that he's just oblivious to certain other characters' advances. This is one cause of the Ignored Enamored Underling's problems.

The Japanese have a special term for this: Donkan (鈍感), which is basically the short-form word for this trope.

Frisk doesn't realize Monster Kid was flirting with them until a moment later, with one of the askers comparing them to an oblivious anime protagonist.

Frisk doesn't realize Monster Kid was flirting with them until a moment later, with one of the askers comparing them to an oblivious anime protagonist.