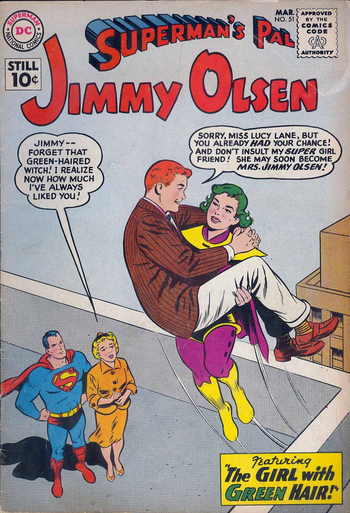 "When I had you to myself
I didn't want you around
Those pretty faces always made you
Stand out in the crowd
But someone picked you from the bunch
One glance was all it took
Now it's much too late for me
To take a second look"
— The Jackson 5, "I Want You Back.

The jealousy-spurred Love Epiphany of a character who's in love with someone else, but has been in denial about this up until now.

Before the crisis, the character is perfectly fine being Just Friends or totally platonic bickering partners with another. But then, that other character gets romantically involved with an interloper, causing their not-at-all love interest to suddenly feel the sting of their absence. Once they finally admit to themselves their feelings, the Romantic False Lead's got hell to pay.

In some works, this is the cue for a Relationship Upgrade. In other works where Status Quo Is God, the envious one will stubbornly refuse to come clean and revert back to her "friend" self once the romantic complication is out of the picture. It's a Aw Look She Really Does Love Him moment — but a hidden one. This arc is especially common when the jealous one is a Tsundere.

Sometimes this trope comes into play after a couple has broken up, with one side having convinced herself that she's over him until seeing her ex with a vixen causes her to gnash her teeth.

If one partner isn't in denial and deliberately stages such an incident to make the other jealous and admit her feelings, he's pulling an Operation: Jealousy. Sometimes overlaps with Unrequited Love Switcheroo — a flip between which lover's love is unrequited. The writer might need to Derail the Love Interest if the new love is working out too well for the plot to continue.

A Sub-Trope of Love Epiphany.