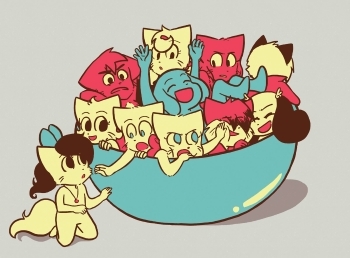 A bowl full of cats and dogs
Advertisement:

Quite possibly the ultimate Will They or Won't They?, Bittersweet Candy Bowl

is a webcomic by Veronica Vera

. It follows a group of feline and canine friends through middle and high school, focusing primarily on a pretty, white-colored Tsundere called Lucy and her ongoing crush/rivalry with Nice Guy Mike. Also featured are Love Triangles (actually, a developing Love Dodecahedron) among Jerk with a Heart of Gold Paulo, cheery Teen Genius Daisy, Cloudcuckoolander David, and Abbey, Daisy's new boyfriend with a troubled past. There's also Jessica, a strong-willed cheerleader who has a fancy for Lucy and hates/dislikes Tess, Rachel, a cheerful cheerleader, and Jasmine, Paulo's new girlfriend.

An example of Cerebus Syndrome, Bittersweet Candy Bowl started off almost entirely lighthearted but delved into heavy drama pretty early on — there are still jokes, though they are increasingly rare.

While the series makes use of anthropomorphic cats, dogs, and birds, these are derived more from the Funny Animals trope than any serious links to whatever classifies as a true Furry Comic. The characters were developed when the author was young and presumably unaware of the Furry Fandom.

The comic is an ongoing serial, and is published every Monday, Wednesday and Friday, alongside an occasional Ask Blog

on Tumblr. Be warned: this comic has an enormous amount of teen angst melodrama.

The creators recommend that new readers start at Volume Two. You can also take a look at the Webtoon release

, which starts from the beginning with updated art and dialog.