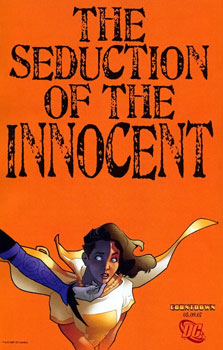 "The more beautiful and pure a thing is, the more satisfying it is to corrupt it."
— Rule #43 of the Rules of the Internet note This rule is sometimes placed at #15, since only four of the rules are standardized
Advertisement:

A series introduces a character as sweet and lovable, a fountain of Heartwarming Moments, more comic relief than anything, who likes nothing more than to pet little creatures. They make you adore them, root for them, love them and want to hug them, but then they start hanging out with the wrong type of people and make a slow walk to the dark side...

Then the writers proceed to change the character's personality bit by bit, not actually breaking them, but affecting their personality, so that they becomes either less likable or more sultry and devious than their naturally cute self, or is taught that being more aggressive will be better than being picked on. They become bolder with their new personality with every act of The Corrupter until they are not so innocent anymore. This is a common staple in various chick flicks, as what is more tempting than knowing just how awesome it could be to be popular, be powerful, and most importantly, have that Love Interest you want so bad wrapped around your neck?

In the end of their transformation, there are two outcomes: either they realize the situation before they get enthralled with the lifestyle, and throw it down for good or, if the plot is cynical or tragic, they permanently change to that personality and that way of life for good.

See also Face–Heel Turn, where the character isn't just morally corrupted but outright joins the forces of evil. Related to Break the Cutie, for obvious reasons. Compare to Flanderization. Compare to We Want Our Jerk Back!, which is the reverse, comedy version of this trope.