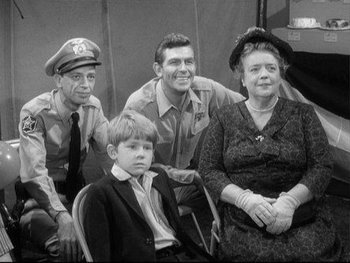 This idyllic Sitcom, which ran on CBS from 1960 to 1968, starred Andy Griffith as Andy Taylor. It remains enormously popular in reruns. At any hour of any day, some television station in the U.S. is airing the show (if you happen to live in North Carolina, you cannot go a week without finding it in your local listings... which is not a bad thing), and it's safe to say that it's one of the most influential programs in American television history; damn near every sitcom, and possibly every show in any genre, produced between 1970 and 2000 owes something to The Andy Griffith Show.

Andy is The Sheriff in the small, friendly town of Mayberry, North Carolina. Despite his authoritarian role, Andy is an easy-going, good-humored guy. He can be tough when the situation demands it, but he prefers to play loose with the rules, and adapt punishments according to the nature of the crime and the individual. His deputy and cousin friend Barney Fife prefers the opposite approach, but since he is clumsy and totally lacking in gravitas, no one takes him seriously. Most of the humor from the early years of the show comes from Barney's attempts to bring law and order to an already lawful and orderly town, and Andy's subsequent ribbing of Barney when his plans go wrong. Very frequently, Andy will resort to a counter-scheme to protect Barney's fragile ego and what's left of his reputation as a lawman.

The series also focuses on the widowed Andy's relationship with his young son Opie, with Andy trying to strike a balance between being a fun confidant and instilling a strong sense of right and wrong. Andy dated a few women over the course of the series, but Opie's mother figure was Aunt Bea, who lived in the Taylor home and took care of the housework. Andy was also alternately amused and exasperated by the eccentricities of the various townsfolk, including gossipy barber Floyd Lawson, affable drunkard Otis Campbell, highly repressed bureaucrat Howard Sprague, and totally moronic hayseed Gomer Pyle, who was spun off into his own series and replaced with his even more idiotic cousin Goober.

It also had an After Show, Mayberry R.F.D., and a Reunion Show in the 1986 made-for-TV movie Return to Mayberry.

Sixteen episodes from the show's third season have fallen into the public domain, as the copyright was not renewed before the December 1991 deadline.