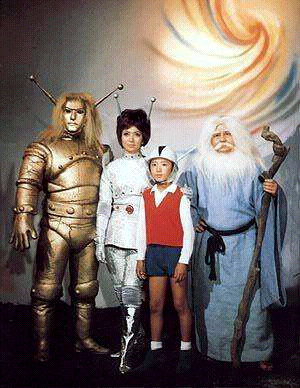 The first color Toku broadcast two months before Ultraman, Ambassador Magma is based on the manga by Osamu Tezuka. It was later turned into an anime.

The series revolves around a family of robot-like beings who are called upon by an Earth boy whenever a giant monster appears initiated by Goa, a space alien. The one summoned by three whistles is the eponymous Magma, who fight the monsters.

The dub of this series was known as The Space Giants. It cut minimal scenes but still changed names. For example, Magma became Goldar, while Earth became Methusa, after the 900-year old man (Methusaleh) in The Bible. The opening was not kept, but the music within the show, including uses of the famous theme tune, was.

An animated OAV was produced in 1993 which retold the story. It was pretty much universally panned.