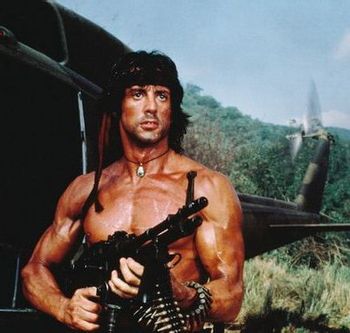 "Thought I'd try shooting my way out. Mix things up a little."
— Master Chief, Halo 3
Advertisement:

Any problem can be solved by the application of a fist to the right guy's face.

This is the Action Hero's primary operating procedure.

An Action Hero is a form of protagonist who primarily uses his fighting skills to achieve his goals in a story. If there's something in his way, his main response is to beat it up. This could be because he doesn't have the patience or skills for any other method, or because he just doesn't have the time. But then again, maybe he actually does try other methods first but it always seems to turn out that Violence Really Is the Answer.

Because his main trials in the story end up being direct conflict, he is always some form of badass or Action Survivor, and it doesn't matter how many battles he has to fight or things he has to blow up, he won't give up. He may use physical combat, brute strength, weaponry or even Mecha to lay the beat-down on his enemies, but he'll always deliver it personally — no standing on the sidelines for this hero. When he does come up against a problem he can't fix with his fists, he might attempt to use his tried and true methods regardless, resulting in a Nice Job Breaking It, Hero situation, or if he's really lucky, Cutting the Knot. For some things though, he may have to rely on another team member.

Also, the Action Hero's storylines are limited to the sort of thing where punching someone in the face actually would solve the problem, unless he's explicitly being taught An Aesop about how "you can't solve all your issues with violence", or he's being set up to fail. Relatedly, the climax to an Action Hero's story almost always culminates in a Final Battle of some sort. While the Action Hero often follows the trope Dumb Is Good, resulting in an Idiot Hero, that need not always be the case. If the Action Hero routinely uses other methods, such as cunning or science, then he may overlap with the Guile Hero or Science Hero roles.

It should also be noted that just having a fight scene does not make one an Action Hero! A character must use combat in ways that relate directly to the main driving force of the story, not simply in the occasional Bar Brawl, or even for protection. If the Hero's main goal is to save his little brother from danger, then he has to kick somebody's ass to do it. The Hero can do all the unrelated fighting on the side that he wants, but if he doesn't use it to accomplish his primary goal then it does not make him an Action Hero. Likewise, a character can be a badass, or show skill in combat, without actually being an Action Hero. If a character never seems to be working towards anything in particular, coming up against problems or facing trials, and generally acting as a Satellite Character, then this trope cannot apply to him.

This trope is not gender specific and can apply to both males and females. A female Action Hero is an Action Heroine. Please be aware that an Action Girl is not the Distaff Counterpart to Action Hero, but a female combatant. When two Action Heroes team up, they may form an Action Duo.