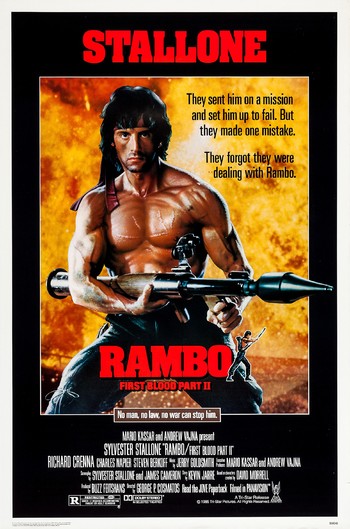 "Sir, do we get to win this time?"
"What if some burn-out POW shows up on the six o-clock news? What do you want to do... start the war all over again? You wanna bomb Hanoi? You want everybody screaming for armed invasion? Do you honestly think somebody's gonna get up on the floor of the United States Senate, and ask for billions of dollars for a couple of forgotten ghosts?"
— Major Marshall Murdock
Advertisement:

Rambo: First Blood Part II is the second film in the Rambo franchise, released in 1985.

A year has passed since the events of First Blood, and John Rambo (Sylvester Stallone) is doing time for the mayhem he unleashed back then. The ex-Green Beret is working in a prison quarry when his old commander, Col. Sam Trautman (Richard Crenna), shows up with a mission. Long after the end of the Vietnam War, rumors have surfaced that American prisoners of war remain in Vietnamese custody

. As one of only three men qualified for the job, Rambo is to sneak into a prison camp to record evidence of POWs. If he succeeds, he may receive a Presidential pardon. Rambo reluctantly accepts and is flown to Thailand to meet mission commander Marshall Murdock (Charles Napier), who warns Rambo not to engage the Vietnamese Army. Outfitted with the latest in technology, Rambo is flown to Vietnam to perform a parachute jump into enemy territory.

Unfortunately, an accident during the jump forces Rambo to discard all of his high-tech equipment to save himself. When he finally touches down, he is left with nothing but his survival knife, his collapsible bow and a collection of customizable arrows. Rambo soon finds his Vietnamese contact, Co-Bao (Julia Nickson), who is able to ferry him through a river to the prison camp. Without the camera he was given to record evidence, Rambo decides to do the next best thing: infiltrate the camp to find and rescue a POW himself. Little does he know that Murdock sent him in expecting him to find nothing, thus allowing the POW issue to be buried and freeing the United States from having to pay reparations to Vietnam. When the truth hits him, Rambo will be set on avenging his betrayal—and now that he's back on the battlefield, only God knows what he'll do to save his countrymen.

Rambo: First Blood Part II is not only the most famous of the Rambo movies, but also the purest definition of an Actionized Sequel. The previous film's anti-war message is discarded in favor of the action-packed story of a hardened soldier returning to save those left behind, with gunfights and explosions aplenty when he's not putting his survival skills to well-worn use. Savaged by critics upon release, it nevertheless became the second highest-grossing film of 1985 and by far the most successful film in the series. It has inspired countless imitators, including films and video games (such as Contra and Ikari Warriors). The film itself was adapted into a number of arcade and console games, including an NES action-adventure game. It would be followed up three years later by Rambo III, which would cement Rambo's status as a One-Man Army.

Col. Trautman: How will you live, John?
Rambo: Day by day.