All spoilers for Halo: Combat Evolved and Halo 2 will be left unmarked. You Have Been Warned! 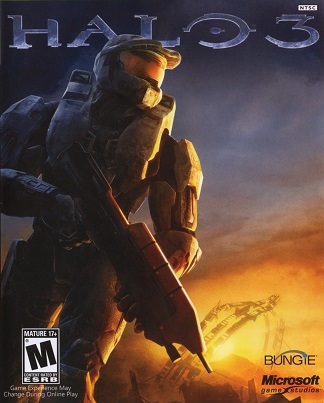 Finish the fight.
"They let me pick, did I ever tell you that? Choose whichever Spartan I wanted. You know me. I did my research. Watched as you became the soldier we needed you to be. Like the others, you were strong and swift and brave. A natural leader. But you had something they didn't. Something no one saw... but me. Can you guess? Luck. (Chief crashes planet-side) ...Was I wrong...?"
— Cortana
Advertisement:

The final installment in the original trilogy of Halo games, released on September 25, 2007 in North America. Picking up directly from Halo 2, Master Chief returns to fight for Earth and discover the secrets of the Forerunners who built the Halos. The game was a smash, earning $170 million on its first day alone, breaking all previous records (including Halo 2's).

The campaign was no longer split into two perspectives like in Halo 2, instead having a single campaign revolving around the Master Chief and the Arbiter working side by side, with the latter only playable in co-op mode (which for the first time in the series could support four players, with players three and four taking on the role of two new Elites created specifically for co-op). The story wrapped up the original trilogy and shows the conclusion of the Human-Covenant war.

The gameplay was kept largely intact and identical to the previous games, only refining the changes made in Halo 2. The only real new features are the weapon types (a complete subset of Brute weapons and two additional grenade types to the standard frag and plasma, spike and incendiary), deployable equipment that change the battle dynamics (impenetrable "bubble shield," trip mine, radar jammer, etc.), and Forge Mode (a map editor which allows the player to create customized multiplayer maps and gametypes).

Though Interquel Halo 3: ODST (which, despite the title, takes place concurrently with Halo 2) and Prequel Halo: Reach were the next two Halo shooters to be released, Halo 4 is the next chronological game in the series, showing the aftermath of the war, the continued development of the UNSC and its Spartan program, and further revelations about the Forerunners.

The game was by far the most successful in the Halo franchise, with lifetime sales of more than 14.5 million.

On October 16 2013 until October 31, Halo 3 was offered as a free-to-own download for Xbox Live Gold customers

. 10 years after release, the original version was announced to be backwards compatible for Xbox One, followed by its first release on PC as part of the ported Master Chief Collection in July 2020.