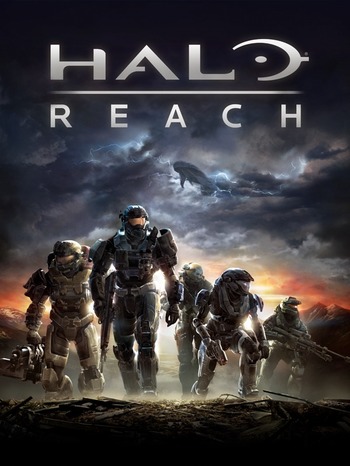 Remember where it all began. Remember Reach.
"Not gonna lie to you, Lieutenant - you're stepping into some shoes the rest of the squad would rather leave unfilled. Me, I'm just happy to have Noble back up to full strength. Just one thing - I've seen your file, even the parts the ONI censors didn't want me to. Glad to have your skillset. But we're a team. That lone wolf stuff stays behind. Clear?"
— Carter-A259
Advertisement:

Halo: Reach is a First-Person Shooter which also happens to be the final Bungie-produced Halo game, released September 14, 2010. It is a prequel to the original trilogy, dealing with the events described in the Expanded Universe novel Halo: The Fall of Reach. It follows a group of SPARTAN-IIIs (and one SPARTAN-II) called NOBLE Team. You take on the role of the newest addition, Noble Six, as you fight through the fall of the eponymous human colony. It has a completely new engine (unlike Halo 3: ODST) and is Darker and Edgier (700,000,000 people die on Reach, and you can't change that). The game is also structured more as a war film, as opposed to the Space Opera-esque original trilogy.

Like ODST, the gameplay hearkens back to the days of Halo: Combat Evolved; there is no Guns Akimbo, and health (unlike shields) will not fully recharge without a health pack. However, weapons have received an extensive overhaul, and a major new feature is the Armor Abilities, individual upgrades that allow you to access specific abilities such as Active Camouflage, Sprint, Evade, Armor Lock and a Jetpack. There is also a great deal of customization; the cosmetic changes you make to your personal Noble Six will transfer into the campaign, and you have direct control over almost every aspect of a potential multiplayer match (including a heavily revamped Forge mode).

Until 2019, it was the only Xbox 360-era game in the main Halo series not to be included in the Halo: The Master Chief Collection compilation for Xbox One. In December of that year, Reach was added to the collection and was the first part of the MCC be ported to the PC.