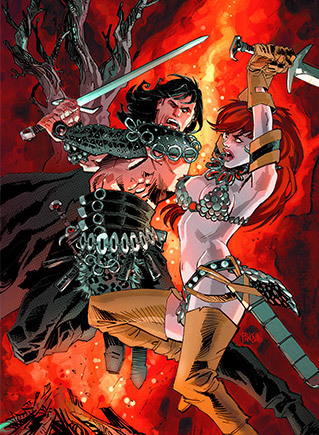 Now available in His and Hers.
Rico: Why would they give her such skimpy armor that can only protect such a small portion of her body?
Bron: How would I know? Maybe those are the only parts of her that are vulnerable!
— Robotech
Advertisement:

The question of how a character can stay protected while wearing this stuff can be answered with protective runes in the form of tribal warpaint or tattoos, their actual armor consisting of invisible Deflector Shields, a Healing Factor making armor moot, or the "wearer" simply being a Screaming Warrior with no sense of self-preservation. Another Hand Wave is the idea that the character comes from a hot climate or a culture where less clothing is worn, or that they're a Fragile Speedster who doesn't like to be burdened with a lot of armor. If Played for Laughs by The Loonie, it's usually "justified" by a distraction bonus. All of this is related to the idea that Armor Is Useless, or at least that there's little correlation between how useful it is and how much it visibly covers. However, skimpy armor can potentially be justified if it was designed in-universe mainly for ceremony or entertainment, such as in Gladiator Games (This actually happened in Real Life; Roman gladiatrixes wore the same outfits as their male counterparts, ie, nothing above the waist).

Of course, if viewed from a gender-flipped perspective, some real-life warriors, such as the Celts of Europe and Zulus of Africa, are known for going into battle wearing next to nothing, but they carried shields for protection. This means it's plausible that a female warrior could wear next-to-nothing, and still be an effective warrior, if they are equipped with a decent shield. Realistically speaking that should tend to lead to some gnarly battle scars, though.

A downplayed feminine version is the so-called "boobplate", which is a breastplate that doesn't expose flesh but is shaped with individual breast cups. As sometimes depicted—with deep cleavage and no room for protective garments—this could be an impractical design. In combat the deep cleavage would transfer some of the impact of a heavy blow to the breastbone, potentially wounding the wearer (though much of the force would be lost, with the strike being deflected to the center chest instead of heading directly there - much like how a projectile loses force on a ricochet.) Less extreme examples make this unlikely as long as there is enough space and/or padding behind the metal, since plate armor is very tough even without a glancing shape.

Men in history have worn decorative armors with similar "shot traps" and it's been proposed that the real reason there are no historical examples of a "boobplate" is that there were nowhere near enough women buying bespoke armors for themselves that a new style would be created for them; most women who donned armor had to make do with whatever they could get their hands on, and the very few professional women-at-arms who purchased bespoke armor could use the male template just fine as long as it was tailored to their measurements. Many medieval breastplates had a dome-like shape with plenty of empty space over the chest, so an average-sized bust would fit with no problem, while a larger one could be accommodated by just increasing the globose shape or shifting it upwards. And it's not even that uncomfortable — boobs can be compressed quite a lot thanks to them being mostly fat. Of course, there's a real-life parallel in the form of armored codpieces, or "schlong armor" as some jokingly call it, so maybe it's not implausible for a "fancified breastplate" to be made in a fictional society where female warriors are more common and more assertive about their sex than they were historically.

A mainstay of Speculative Fiction. Form-Fitting Wardrobe is a sister trope describing any outfit that's depicted as more form-fitting than its real life version. Stripperiffic is another supertrope, encompassing any skimpy outfit worn in action whether or not it’s supposed to be armor. Thong of Shielding, Bare Your Midriff, and Cleavage Window are possible components of a chainmail bikini. It may or may not be worn as 24-Hour Armor. A Battle Ballgown tends to incorporate more cloth and coverage, but if it has risqué features like being backless or having a cleavage window then it could also qualify as a chainmail bikini. Not much of a concern, protection-wise, if Armor Is Useless. For people who fight completely naked see Full-Frontal Assault. A chainmail bikini is a common look for a Nubile Savage. There is a Web Comic called Chainmail Bikini,

which naturally features one.