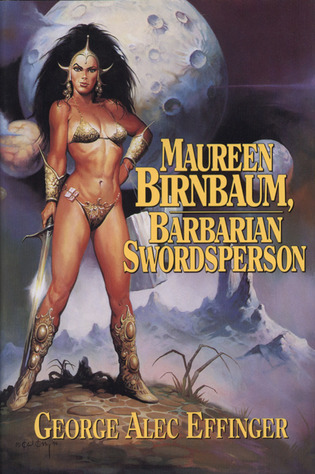 Maureen Birnbaum, Barbarian Swordsperson is a series of humorous fantasy short-stories by George Alec Effinger, which tell the adventures of a young Jewish American Princess from a prep school who discovers she can visit other worlds and is surprisingly good with a sword. The first eight stories were collected in an anthology of the same name. Three later stories remain un-anthologized.

In the first story, Maureen "Muffy" Birnbaum finds herself mysteriously transported to Mars—which turns out to be exactly as described by Edgar Rice Burroughs. She rescues the hunky Prince Van from some some four-armed giants, and promptly falls in love. Before anything much can happen, though, she abruptly returns to Earth, wearing nothing but a Chain Mail Bikini, where she relates her story to her old school roommate, Elizabeth "Bitsy" Spiegleman, and then mysteriously disappears again.

In later stories, it is revealed that she has the power to travel to other worlds, but cannot properly control her destination. She keeps trying to return to Mars and Prince Van, but ends up instead on other worlds which bear suspicious resemblances to worlds created by other SF writers. Somehow, however, she is always able to return to present-day Earth, usually at a particularly inconvenient time for her former roommate, to whom she continues telling the tales of her adventures.

Tropes in these stories: