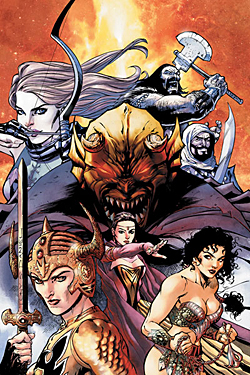 Demon Knights was a comic book published by DC Comics, initially written by Paul Cornell and later by Robert Venditti. It was launched as part of the New 52 and is set in The Dark Ages of the DC Universe.

After a prologue establishing Madame Xanadu's and Etrigan's roles in the last days of King Arthur, the story skips forward a few centuries. Xanadu and Jason o' the Blood visit a small village in Europe, where they meet Vandal Savage, the Shining Knight, a Saracen inventor named Al Jabr and an Amazon warrior named Exoristos. They join forces when the Questing Queen and her horde attacks the village on its way to sack the nearby city of Alba Sarum. In defending the village, they meet the Horsewoman, who has been protecting it, and afterwards embark on other quests together; some for the nobility of assisting those in need, some for profit, and some for reasons all their own.

The series lasted 23 issues, and shows the origin of the Ancient Tradition of the rebooted Stormwatch (which Cornell began).

Not to be confused with Demon Knight.