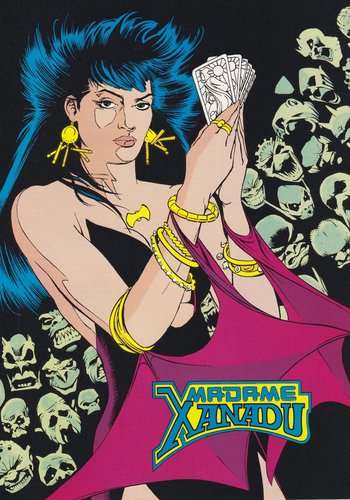 Enter freely, and be unafraid.
Advertisement:

Madame Xanadu was created for DC Comics by writer David Micheline and artist Val Mayerik in 1978, initially serving as a linking character in anthology series Doorway to Nightmare, a 'good witch' who'd help people out with their supernatural difficulties. She went on to join Jim Corrigan's Spectre as part of his supporting cast, and pops up from time to time in DC's other magic-based books.

She had a Vertigo series from 2008-2010, written by Matt Wagner and penciled mainly by Amy Reeder Hadley. The series runs with the revelation in Neil Gaiman's original The Books of Magic series that Madame Xanadu was Nimue and reveals her to be the youngest sister of Morgana Le Fay and The Lady of the Lake, an immortal who has lived for thousands of years. It chronicles Madame Xanadu from her prehistoric childhood, through Arthurian times, up through the 1960s.

In the New 52, she was a main character in Demon Knights (set in The Dark Ages) 2011-2013, an occasional character in Resurrection Man 2011-2012 and was a founding member of Justice League Dark.