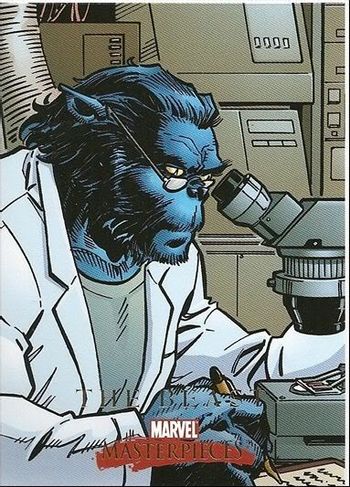 And he minors in asskicking too.
"We are not only men of science: we are men of hope."
— Dr. Jonas Venture, The Venture Bros.
Advertisement:

Oh no! The city is in danger! This looks like a job... For Science!

A hero who uses science, technology and/or super-science to save the day. A staple of science fiction and an expression of the faith that science will save us rather than doom us. The Science Hero is the third part of the Hero Triangle, alongside with Action Hero and Guile Hero.

This hero is one part Badass Normal, two parts The Smart Guy, with a hint of Wrench Wench and Gadgeteer Genius. They're defined mostly by being highly technically proficient scientists (often in all fields) and with a sense of adventure and curiosity. Plus, gadgets!

The Science Hero has become something of a Forgotten Trope with the onset of Postmodernism. Post-modernism rejected progress for progress's sake, which is a favorite motivation for a Science Hero, and allowed a resurgence of Science Is Bad, Nature Hero, and Rock Beats Laser.

It also demanded personal motivations for characters. Classic Science Heroes tended to do their science for the good of society/humanity/the universe/etc. or For Science!, and viewers were expected to be inspired by them. Modern Science Heroes are expected to have a personal or psychological reason for getting into science. Some reasons make the character a Mad Scientist, with all the craziness that implies. It's good craziness used for a good cause, but we're not supposed to take that kind of character as a role model! Other reasons allow the pursuit of science to end or be shoved in the background because it is a means to a reachable end or to an end that can be better reached some other way. And, in modern fiction, even a Science Hero can be thrown off track by The Power of Love — and more likely than not, this will be expected to be seen as a good thing...

For these reasons, it is hard to find new, unambiguous Science Heroes. It's a pity — we still need to inspire the scientists.

See also Giving Radio to the Romans. Compare Nature Hero, Badass Bookworm, Omnidisciplinary Scientist, and Celibate Eccentric Genius if the Science Hero rejects romantic love in favor for benevolent use of science. Contrast Science Is Bad and Mad Scientist though heroic mad scientists are becoming more popular. Often a champion of the Enlightenment in works featuring Romanticism Versus Enlightenment and opposed by an Evil Luddite. If the work portrays them positively, it likely also ascribes to Science Is Good and, depending on certain situations, Working-Class Hero. A Puzzle Thriller is a good place to find them.

Very buff for some reason and can build amazing inventions that completely break the laws of physics.

Very buff for some reason and can build amazing inventions that completely break the laws of physics.