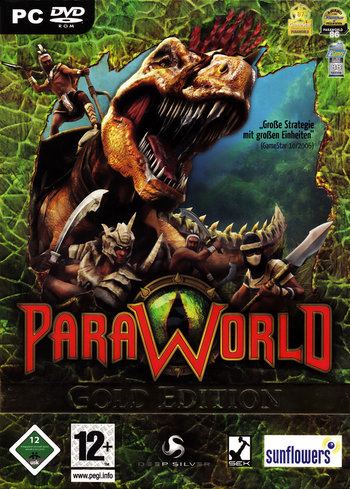 Paraworld is a 2006 PC Real-Time Strategy game by the German company SEK.The plot revolves around a trio of scientists, who each had discovered evidence that led them to conclude that a parallel universe exists. Before they could announce their findings to the world, however, they found themselves stranded into said parallel world by a mysterious organization SEAS, and must find or make way back home.

This parallel world is inhabited by dinosaurs and other prehistoric animals, which the native tribes have managed to train as beasts of war. The Ninja Pirate Zombie Robot approach defines these and the other units in the game, resulting in a setting of Schizo Tech mixture of Steampunk and Medieval Prehistory with ancient flavor.

In a meta sense, the game is a mass homage to Jules Verne novels, Jurassic Park, The Mummy (1999), Dinotopia, Indiana Jones and many other lost world/adventure works; quite uniquely for an RTS setting.

The game's most notable feature is the Army Controller, a panel on the left of the screen displaying every unit you control and what they are doing. While offering an incredibly convenient method of controlling units, the obscurity of the game means that it failed to be as revolutionary, as the creators hoped.

open/close all folders
The Setting 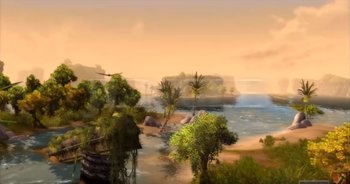 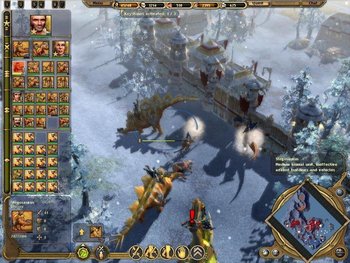 Game Interface, with The Army Controller on the left.
Videogame Cruelty Potential: The player can totally leave the AI allies to a ceratin death: