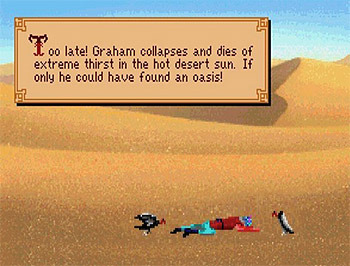 "Dying for a drink, Graham?"
Sherif Ali: There is the railway. And that is the desert. From here until we reach the other side, no water but what we carry with us. For the camels, no water at all. If the camels die, we die. And in twenty days they will start to die.
T.E. Lawrence: There's no time to waste, then, is there?
— Lawrence of Arabia
Advertisement:

You're in the desert, a parched barren wasteland stretching for miles in every direction, with the occasional Hollywood Mirage gleaming in the distance to provide a false sense of hope. If the maddening heat doesn't drive you into a Mushroom Samba, then the freezing air of night will chill you harshly or just kill you, the lack of water or one of the desert's many hostile inhabitants probably will. Expect Circling Vultures lurking ominously overhead in a sky as barren as the land, with not a single cloud in sight. The sun appears to fill the sky on its own and the camera will point at it just to make sure you know. A shot of the characters marching (or crawling) forward moaning "Water, water..." is a common element, especially in more humorous takes.

Analogously, this trope is to Shifting Sand Land as Hungry Jungle is to Jungle Japes or Lovecraft Country is to Hollywood New England — a nastier, more serious portrayal of the same region. Desert Warfare involves fighting a war in one of these, and all the problems that apply here are now compounded by the presence of enemy soldiers. See also Crossing the Desert and Sea of Sand. The Sinister Southwest may be depicted as this trope as well.

Fergy and Paulie are out in the middle of the desert trying to get to somewhere, because riding an airplane is just too expensive.

Fergy and Paulie are out in the middle of the desert trying to get to somewhere, because riding an airplane is just too expensive.