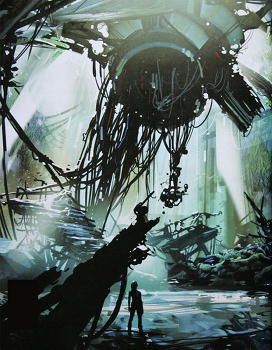 It's been a loooooong time.
Advertisement:

A high-tech area that is abandoned and in disrepair. Expect to see exposed and damaged wires that screw with the power, bad lighting that is most likely powered through the damaged wiring or a failing power source, and at least one puzzle devoted to restoring power. Don't expect to see sentient Mooks here; you may find rats or some fantastic vermin that have been chewing the wiring, various mutant monsters, and security drones (that will only turn on after the above mentioned "restore the power" puzzle), but expect your biggest foe to be the environment. Scary all around (or at least it keeps you on edge). This one is rarely found in linear titles, because a key factor in these levels is exploration.