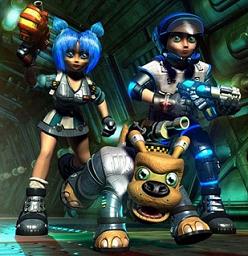 A third-person shooter released by Rare in 1999 for the Nintendo 64.

The game stars twin siblings Juno and Vela, and their dog Lupus, who together make up the Gemini unit of the Space Police organization "Jet Force." Upon responding to a distress signal, they witness an attack on the not-Endor planet Goldwood against the not-Ewok Tribals by the bug forces of the evil Emperor Mizar. The trio move to do their hero thing, but they are suddenly attacked by Mizar's forces and separated, each one starting their quest at a different location.

From there, each member of Jet Force Gemini must embark on their own routes towards Mizar's Palace, saving Tribals and blasting his evil bug henchmen along the way. Once the trio are reunited and manage to defeat Mizar for the first time (but, to their dismay, he escapes), they receive upgrades (Juno and Vela get jetpacks, Lupus becomes a tank) and are allowed to explore each other's levels freely, opening up new routes with their individual powers and gathering resources for the second and final showdown with Mizar.

Originally designed as a cutesy shooter, it got a Darker and Edgier makeover halfway through development and ended up better for it. This being a Rare game, it also contains a good amount of their characteristic humour, such as furry dice in the cockpit of the Jet Force Gemini ship and a major character with the distinctly un-Sci-Fi-ish name "Jeff".