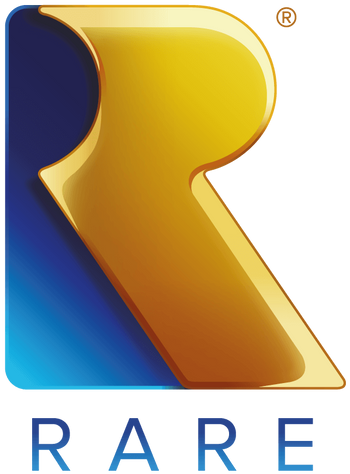 Over thirty years of laughs and cheers!

(formerly Rareware) is a Twycross-based (though they started in Ashby-de-la-Zouch) video game development company founded by Chris and Tim Stamper in 1982. They're famous for their pioneering of sophisticated technology to make video games, the sheer amount of double entendres, the idiosyncratic little mysteries they weave into their games that leave gamers pondering for decades, and their media-shy nature.

While the company attained most of their early fame (as "Ultimate Play the Game") through their games on the 1980s home computers such as ZX Spectrum, Commodore 64 and MSX, they are best known for their work with Nintendo. In 1985, the Stamper brothers figured out how to reverse-engineer an interesting new video game console from Japan known as the Famicom. Nintendo was so impressed that they gave them the budget to produce titles for the system, which they proceeded to do to the tune of around sixty games under the new name "Rare" (having sold the "Ultimate" brand). While this period brought about games like Battletoads, it would be the SNES-era where they'd find the start of their biggest wind of fame and success. Their subsequent experiments with the new technology once again managed to impress Nintendo, with the Japanese company now buying a 25% stake in the company (which would eventually grow to 49%) and giving Rare the option to work with one of their characters. They chose Donkey Kong, a once popular character that had fallen by the wayside in the face of Super Mario's popularity, believing that they could revitalize the character and make him relevant once more.

Now renamed Rareware, the company released Donkey Kong Country in 1994, which became the best-selling game for the system behind only Super Mario World, and the ape would get additional games throughout the SNES's lifespan. The company would hit their stride come the Nintendo 64, where they became well-known for such games as Perfect Dark, Jet Force Gemini, Diddy Kong Racing, Killer Instinct, Banjo-Kazooie, (and subsequently its sequel Banjo-Tooie), Donkey Kong 64, and Conker's Bad Fur Day.

Early during the Nintendo GameCube's life, however, a big change was on the horizon. While in the midst of producing Star Fox Adventures, Rareware began looking for potential companies to fully buy out the studio, to help offset the rising costs of game development. With Nintendo surprisingly refusing to acquire the studio, the Stamper brothers found themselves being bought by Microsoft, who had recently entered the console video game market and had been courting the developer for some time. The deal closed in late 2002 after Activision failed to make a better offer, and Rareware (now named "Rare" once more) was now a first-party developer for the Xbox. Rare retained ownership over their own characters and properties in the change, while Microsoft granted Rare permission to continue producing games for Nintendo handhelds if they so wished. For their part, Nintendo did actually end up acquiring a Western game developer that same year after all—the American Retro Studios.

Under Microsoft, however, Rare would make games that received mixed-to-positive critical reception, with most becoming financial disappointments to varying degrees. Fans would come to feel that the UK-based developer had lost some of the magic it had when under Nintendo, and this sentiment would only become stronger over time, with the departure of Chris and Tim Stamper in 2007 not helping. Following the fan backlash towards and commercial failure of Banjo-Kazooie: Nuts & Bolts, Rare would find themselves tasked with making sports games solely for the Xbox 360's Kinect peripheral. Kinect Sports ended up being the most successful game produced by the developer in years, leading to a similarly successful sequel, but a failed third entry on the Xbox One.

By this point, several key employees had left Rare to form the indie company Playtonic Games and make the kind of games Rare used to be famous for in the N64 era—their first game, Yooka-Laylee, would release in 2017 to mixed-to-positive reviews. In addition, while Rare properties would be utilized at this time, it would be other companies playing with the characters, such as Double Helix Games with Killer Instinct. However, Sea of Thieves, while receiving mixed critical reception, received positive audience reception and was a financial success.