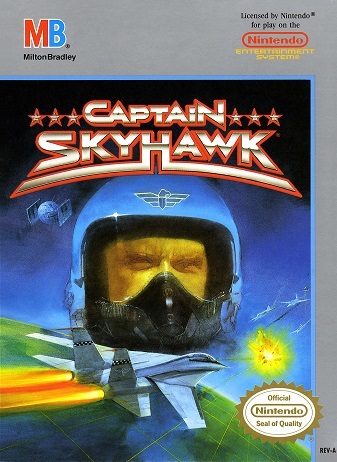 Don't get used to seeing that face.
Advertisement:

Captain Skyhawk is an NES game released in the United States in June 1990. The game was developed by Rare and published by Milton Bradley Company.

The game has the player take the role of the titular Captain Skyhawk, a fighter pilot who must defend the Earth from a race of aliens that is draining its energy to fuel a giant alien space station which will then destroy the planet with a giant laser. The player is charged with destroying the four alien land bases, dropping supplies to allies and rescuing Earth’s scientists before destroying the alien mothership.

The game itself alternates between top-down shoot ‘em up segments and behind-the-back scenes ala After Burner. The player gets to change the altitude of their fighter jet in both the top down and behind-the-back scenes. The player can also purchase a faster firing cannon and limited supplies of missiles between missions at a friendly Space Station.

The game is an average title in the NES library and never earned much notoriety or fame apart from having good graphics at the time with the terrain in the top-down missions being shown at an isometric angle and hit boxes that suggest a 3D environment. Long time Rare composer David Wise provided the music.