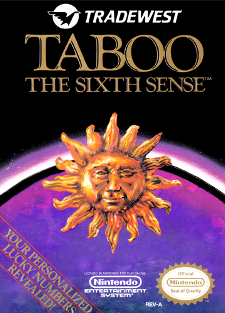 Taboo: The Sixth Sense is a video game released on the Nintendo Entertainment System in 1989, developed by Rare and published by Tradewest. It's a game involving Tarot Cards. Everything from the Major and Minor Arcana is present.

First, the player has to tell their name, birthdate, gender, and question, then the cards get shuffled. After that, ten cards are shown, with predictions and advice. And after that, depending on the state the player selected, they may get one to eight different lucky numbers.

I will now deal the tropes: