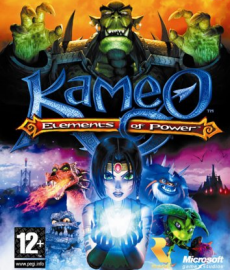 Kameo: Elements Of Power was a launch title for the Xbox 360, originally developed by Rare initially as a Nintendo GameCube launch title (early plans for it to be a Nintendo 64 game were quickly scuttled), then transitioned to the Xbox and pushed further back and finally released for the Xbox 360 in 2005. Kameo is a bizarre hybrid of Beat 'em Up and Zelda-style Action-Adventure puzzler.

The main premise is that Kameo, one of the princesses of the elves, receives the family's cherished transformation magic instead of her older sister Kalus. Kalus, infuriated that her younger and adopted sister got the powers and not her, frees the king of the trolls, Thorn from his imprisonment and kidnaps the rest of their family. Kameo attempts to rescue her family by storming the castle directly, but gets hit so hard she gets her powers knocked right out of her. This sends her on a quest to restore her powers, rescue her family, and defeat Thorn and Kalus.

Kameo's Transformation magic lets her transform into 10 Elemental warriors of Fire, Water, Earth, Wood, and Ice. The warriors are:

Curiously, the game seems to be a bit schizophrenic about its target audience. It is about an elvish fairy princess living in a rainbow-colored palace in the clouds, who engages in Lord of the Rings-style battles, and which tracks the carnage and bloodshed she creates in battle. This is likely a result of its long development cycle and the fact that it was shuffled from one system to another on multiple occasions, which in turn led to the game's development going off in different directions at different points in time.