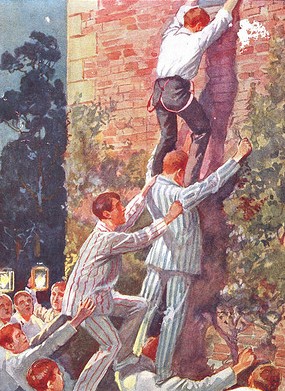 Sometimes, you need elevation. You might need to reach something on the top shelf, or you might be trying to look over a wall, or maybe you're trying to escape out a very high window. But what do you do when there aren't any trees, hills, ladders, or stools around?

Simple: You stand on your friends.

A Human Ladder occurs any time someone climbs on someone else for added height. Generally, one stands on the other's shoulders, but other methods show up. Some Human Ladders consist of more than two people, although the more you add, the sillier it gets.

Add a coat to become a Totem Pole Trench. For an extreme version of this trope where the human ladder becomes a co-existing organism, see The Worm That Walks. Contrast I Need No Ladders, the other option where there are no nearby ladders. See also Chain of People.