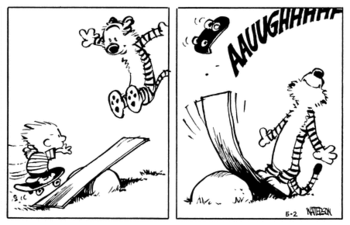 "When you have a fat friend, there are no see-saws; only catapults."
— Demetri Martin
Advertisement:

It's one of the most elementary of Improvised Weapons (and indeed, is a simple machine): Take a plank, place it over a rock or barrel or some other object to create a fulcrum, place a payload (which might often be a person) on one end, jump on the other end, and voila, instant airborne surprise. Of course, it requires great expertise in ballistics to hit one's target by such rudimentary means, and many depictions have the payload sail upward only to crash down on the launcher, which is actually a fair approximation of what would usually happen.

Because this device is so basic to construct, it often occurs spontaneously, if not accidentally, during action or chase scenes. It is also seen with real playground seesaws, when a small child is launched into the sky by either a fat kid innocently sitting down, or a large bully with malicious intent.

Mario jumping on the seesaw from a building catapults the Snifit on the other side into a sign.

Mario jumping on the seesaw from a building catapults the Snifit on the other side into a sign.