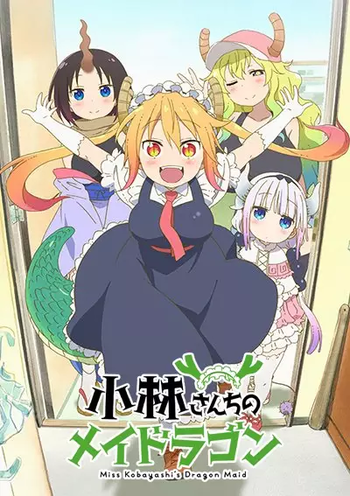 Kobayashi was just a hard-working, otaku software programmer living in Tokyo until one night she got drunk. In her drunken stupor, she climbed a mountain, came across a wounded dragon named Tohru, and pulled a giant, divine sword out of her, saving her life. Before going home, Kobayashi told Tohru she could come live with her if she wanted. When she wakes up the next day, remembering nothing, she rushes off to work and runs into Tohru outside her apartment door. Having heard Kobayashi's drunken rants about maids, Tohru magically transforms into a mostly-human maid and devotes her life to being Kobayashi's maid. Knowing nothing about maids or human society, of course.

A 13-episode anime adaptation produced by Kyoto Animation ran during the Winter 2017 Anime season. It was directed by Yasuhiro Takemoto, with Yuka Yamada serving as series composer, Miku Kadowaki serving as character designer, and Nobuaki Maruki serving as chief animation director. A second season was announced in February 2019 under the title Miss Kobayashi's Dragon Maid Snote The "S" stands for "Super Supreme Second Life Start". While the future of the next season was up in the air for a while, in light of several of the show's key staff members (including director Yasuhiro Takemoto) being among the many victims of the 2019 arson attack on Kyoto Animation, it eventually premiered in July 2021, now being directed by Tatsuya Ishihara, with Takemoto being posthumously credited as Series Director. An ONA series titled Minidora (Mini Dragon) was released in April 2021 in the lead-up to season 2. Both seasons are available for worldwide streaming on Crunchyroll with subtitles, and with an English Dub on FUNimation here

Tohru and Kanna demonstrate the concept of a "reverse" mermaid, with mixed results.

Example of:
Our Mermaids Are Different

Tohru and Kanna demonstrate the concept of a "reverse" mermaid, with mixed results.