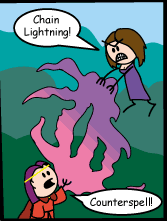 "The pyromancer summoned up her mightiest onslaught of fire and rage. Jace feigned interest."
— Counterspell

A counterspell is a spell that is used in response to an opponent casting their spell, which prevents that spell from doing its thing. Typically, a counterspell has to be specified in the same way that the spell is, so the one casting it has to know the caster and spell that they're trying to counter. In video games with a "casting speed" mechanic, counterspells are typically cast very fast so that they can finish casting while the other guy is still casting theirs. In card games with a last-in, first-out "stack" for responding to opponents, that isn't needed.

Subtrope of Anti-Magic. The key distinction between this and Dispel Magic is that this is stopping a spell while it's being cast, rather than removing its effects after it already has been. And keep in mind that simply having the opposite effect of a given spell (e.g. positive vs. negative Status Buff; inflict/heal poison) is not enough to qualify as a counterspell. Compare Curse Escape Clause.

The shape of a dragon begins to coalesce from mist, and Kelson interrupts with the counter.
"Drathon kill,
Power fade.
Senses still,
Conquer shade!"