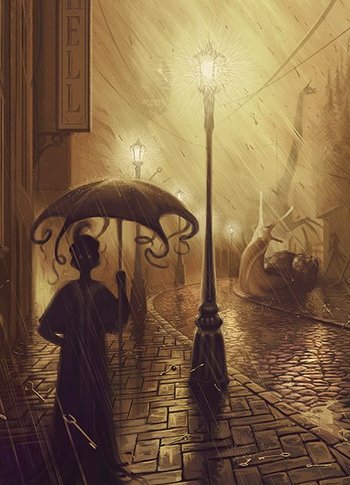 Just another ordinary day in the Actuality...
Advertisement:

Invisible Sun is a surreal Fantasy Tabletop Roleplaying Game created by Monte Cook of Dungeons & Dragons and Numenera fame. The game revolves around the Actuality, a dreamlike realm that until recently was hidden away thanks to a great and horrific magic war that caused many to flee to the non-magic world of Shadow. Characters have discovered they are vislae, or magic users, and with that comes access to Actuality, its nine suns note Not so much literal suns as realms representing certain concepts, and the fantastical City of Notions, Satyrine, which is starting to rebuild itself in the post-war period. Vislae work on settling into their new magical lives, which might simply involve intrigue and helping to rebuild the recovering Satyrine and go all the way to an epic journey that takes the PCs to all nine suns.

All characters are summed up with a statement consisting of four parts: "I am a [Foundation][Heart] of the Order of [Order] who [Forte]", each of which establishes an important part of the character's nature. The Foundation is the character's background and dictates their physical existence, such as where they live, what they do, and who they know. The Heart dictates which one of temperaments a character roughly falls into and the symbols they use. Order is one of the fournote Five, if you count the excommunicated Apostates Orders of the Invisible Church a vislae can be a member of and rules over how they call on magic. And finally, a Forte grants further talents and abilities that are unique to the character and can reflect how they manifest themselves to the world.

Along with its emphasis on an eldritch reflection of our own world, Invisible Sun also experiments in mixing conventional tabletop gaming with modern life; when it can be hard to get a gaming group together for regular sessions, games can continue with missing players and outside of the game table itself through e-mail, phone, or smaller group sessions. The game is ideally supposed to be original and flexible. In addition, supplemental material is further provided by Monte Cook through a concept called Directed Campaign, where plot elements, prompts, and even physical props periodically continue to arrive that can change and alter the direction of play.