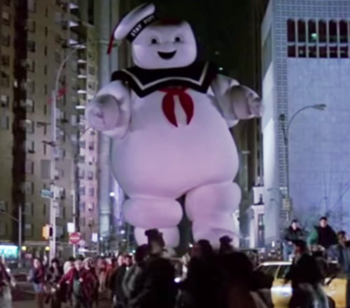 In a movie about ghosts, they throw in this.
"Oh my God! We got a freakin' kaiju up in this shit!"
— John Economos (on Starro the Conqueror), The Suicide Squad
Advertisement:

A work is not about Kaiju or other giant monsters, but throws them in anyway because of Rule of Cool.

Godzilla, or Not Zilla, is a common choice, of course. A King Kong Copy is probably the second most popular option.

Can overlap with Attack of the 50-Foot Whatever, if the small thing turned huge is sufficiently monstrous (and of course not the focus of the work), and is often the result of Make My Monster Grow.

A Sister Trope to Instant Awesome: Just Add Mecha! and related to Garnishing the Story.

Has nothing to do with renting an entire administrative region in India, known as a “Zila”, which is akin to a county or district.

Remember the Krayt Dragon from Knights of The Old Republic? This Dragon is even larger.

Remember the Krayt Dragon from Knights of The Old Republic? This Dragon is even larger.