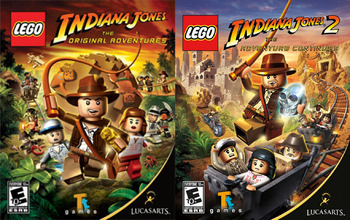 The greatest adventures ever assembled!
Advertisement:

There are two LEGO Adaptation Games based on the Indiana Jones franchise.

LEGO Indiana Jones: The Original Adventures has a storyline based on Raiders of the Lost Ark, Temple of Doom, and The Last Crusade.

LEGO Indiana Jones 2: The Adventure Continues has a storyline based on Kingdom of the Crystal Skull and includes new levels based on the other three movies.