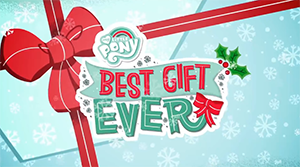 One last chance before the holiday's here!
Advertisement:

A special Christmas Episode of My Little Pony: Friendship Is Magic.

Hearth's Warming Eve is rapidly approaching, creating stress among Twilight, Spike and her friends to get everyone gifts that year. Seeing Twilight in such a panic, Applejack suggests a new approach, doing what her large extended family did: a Hearth's Warming Helper exchange, where each of them is secretly assigned one of the others and gets that one pony a gift. They all agree that's better, and the seven all pull their randomly-assigned pony to begin shopping for them. The ponies go their various ways:

As they all return to Twilight's castle for the exchange, Twilight finds that the pudding with Flurry's added ingredients has grown and spread through the castle, trying to grab anypony within reach. Discord fails to tell Rainbow that sunset causes the winterchilla to become a giant winterzilla, which begins rampaging through the castle. Twilight tries to lure it away by using Spike as bait, but it becomes distracted and starts eating the holiday decorations again. At Discord's suggestion, Fluttershy uses her skill with animals to calm the winterzilla down and make it promise to behave, since its family is away for Hearth's Warming. Meanwhile, Twilight tells Pinkie of her mishap with the pudding, and Pinkie realizes the importance of the gift she got from the reindeer. She dives in and opens it, releasing the exact combination of ingredients needed to counteract Flurry's additions and turn the crazed pudding into a harmless dessert.

As the mess is cleaned up and the group enjoys their pudding, they all apologize for not really getting any good gifts for their intended recipient. Spike gives Rarity the only gift he had left, a song to apologize for this, and she gives him a peck on the cheek, while Twilight realizes they all still have their friendship, which is the best gift of all.

At nighttime, the soft and adorable Winterchilla transforms into a ravaging Winterzilla.

At nighttime, the soft and adorable Winterchilla transforms into a ravaging Winterzilla.