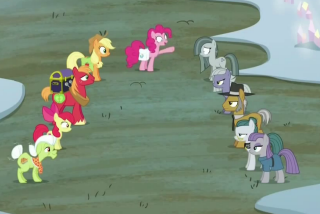 Apples meet Rocks... err, Pies.
"I know they have their traditions and we have ours, but I just want them to see how much better theirs could be."
— Applejack
Written by Nick Confalone
Advertisement:

It's Hearth's Warming time again, and everypony is getting in the spirit. This year, Applejack and Pinkie Pie's families are going to spend the holiday at the Pie family's rock farm. Before departing, the two are surprised that Twilight and Spike are exchanging presents the night before Hearth's Warming, and Twilight explains she and Spike have done that every year as tradition since moving to Ponyville. Later on the train, Pinkie is excited since it'll mean both families get to spend their traditions together, and by the way she describes them, they have a lot in common with the Apple family. Applejack and Apple Bloom, in particular, are looking forward to sharing all of the typical Hearth's Warming Eve traditions with the Pies.

After meeting Maud at the train station, the group arrive at the Pie's rock farm where the Apple meet the rest of Pinkie's family; Pinkie's parents, the very traditional Igneous Rock and Cloudy Quartz, the very shy and withdrawn Marble Pie, and the aggressive Limestone Pie. Limestone even has to warn everypony to stay away from Holder's Boulder, a huge rock that oversees Limestone's quarry and crystal mines. Despite a rough start, Applejack and Pinkie Pie are still confident that their families can get along.

That evening, the Apples quickly find out that while the two families share many traditions, they do them very differently. Instead of a grand feast for dinner, the Pies make bland rock soup. The next day, instead of raising a flag as a symbol of unity by the youngest family member, they turn it into a scavenger hunt for the flag. But, the split up teams do start to bond with each other all the same. Pinkie Pie finds a picture of a rock, meaning she gets to raise the flag. But, on the way back, Pinkie confides in Applejack that they also hide their presents, and nopony has found one in quite some time. In their room, Applejack is upset at how lackluster the Pie family's traditions seem to be.

Overnight, Applejack redecorates the farm to match their own traditions, but they're met with horror by the Pies. In particular, Applejack placed a flag pole on a fault line, causing Holder's Boulder to fall into the quarry below, causing an angry Limestone Pie to demand that the Apples leave. Applejack apologizes to Pinkie Pie for messing things up by forcing her traditions over Pinkie's since she didn't want Pinkie to choose between the family she was born into and the friends who love her like family as her family leaves on the train. While on the way back, a present from Pinkie Pie hits Applejack in the head. This causes Applejack to realize that they should have been explaining their traditions with the Pies rather than trying to force them to accept them, thus creating new traditions between their families. The Apples have the train stop, and quickly head back to the rock farm, where the Pies are trying to get Holder's Boulder back up the quarry. With the Apples' help, they place the boulder back where it belongs, and start sharing their traditions with each other, coming to an understanding.