Even the Dog Is Ashamed 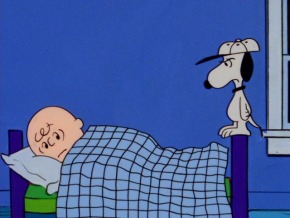 "You've really screwed up this time, Charlie Brown."
Rudy: Is everyone gonna be mad at me?
[Coney dope-slaps him]
Lindesfarne: Yup.
— Kevin & Kell

The protagonist has just done something stupid that he shouldn't have done. Everyone who knows what he did has abandoned him. The protagonist looks to his faithful Fido for validation — dogs love their owners unconditionally, right? No, the dog lowers its head and leaves the room.

In comedic examples the dog, or another pet, may instead put its paws over its eyes and whine, as the animal equivalent of a Facepalm. In live action, this trick is accomplished by placing the animal's paws over its eyes, filming it removing them, and then reversing the film to make it look as though it is covering its own eyes.

A sub-category of the Animal Reaction Shot. An animal who pulls this trick often is probably a Silent Snarker.