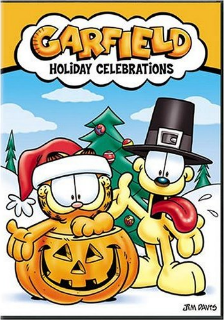 These are just the Holiday Specials.
A series of 12 animated TV specials based off the popular comic strip Garfield. All of them (except the first two, which were animated by Mendleson/Melendez Productions, famous for the Peanuts and Cathy specials) were animated by Film Roman, and all of them were broadcast on CBS between the years of 1982 and 1991.
Advertisement:

The specials use the same voice actors and animation style, at least from Garfield in the Rough onwards, as the animated series Garfield and Friends, though there is no official word on whether the specials and series are set in the same universe.

The specials are as follows:

The Garfield Specials provide examples of:

Garfield on the Town: Shadow

Cornered by a group of alley cats, Garfield's shadow is the first to run for it.

Garfield on the Town: Shadow

Cornered by a group of alley cats, Garfield's shadow is the first to run for it.