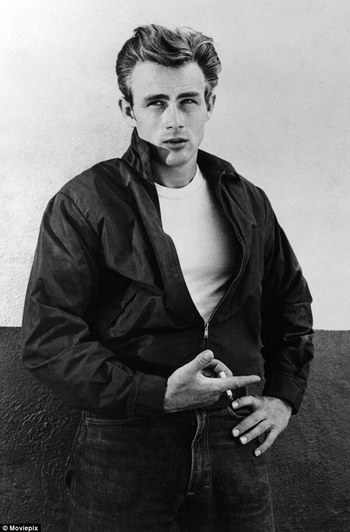 "Dream as if you'll live forever. Live as if you'll die today."
"Being a good actor isn't easy. Being a man is even harder. I want to be both before I'm done."
Advertisement:

He is best known for the movies Rebel Without a Cause, East of Eden, and Giant... with good reason, as those are the only three films in which he had a starring role; he was killed in a car accident at the age of twenty-four, just as his career was starting to take off. Dean was the first actor to receive a posthumous Academy Award nomination for Best Actor, and remains the only actor to have received more than one posthumous nomination.

A symbol of cool for teenagers of the 1950s and nowadays for his being (reportedly) bisexual. His relatively short career and enduring popularity also makes him something of a real-life Ensemble Dark Horse. The roles that made him famous (Cal Trask in East of Eden and Jim Stark in Rebel Without a Cause) were Troubled, but Cute guys with Freudian Excuses; his role as Jett Rink in Giant was an attempt to break away from being typecast as troubled teens.

that "Dean" (more accurately his likeness) would be "appearing" in a new film called Finding Jack, set during The Vietnam War (a conflict which did not begin in earnest until after he died). This met with considerable backlash and is widely regarded as a publicity stunt. The filmmakers defended

their decision to "cast" Dean in the film, saying that it was approved by his family... however he was an only child with no children of his own, and his own parents are long dead, so the family in question is his first cousin Marcus Winslow

(his paternal aunt's son), who was 11 years old when he died, so this approval is also highly contentious.

While he was known to family and friends as "Jimmy", he shouldn't be confused with Jimmy Dean the "Big Bad John" singer, early costar of Rowlf the Dog, and breakfast sausage magnate.note It is sometimes claimed that the two Deans were actually distant relatives, although this is a matter of some dispute.

James Dean's roles are commonly associated with the following tropes: