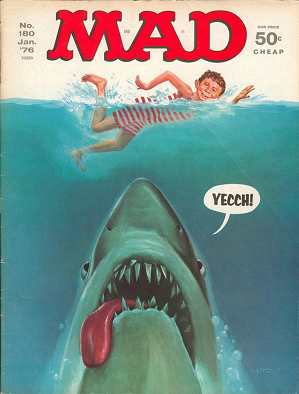 A Stock Parody of the movie Jaws, typically involving a shark or any other creature that threatens a small-town community, killing off a large number of Red Shirt characters that appear. Expect an appearance by some or all of the following: exploding air tanks, ominous fins, a local politician or businessman insisting that nothing is wrong, someone who requires a bigger boat, and of course, low bass strings playing minor 2nds in the background when the creature appears. If the shark itself is singing the music, that goes under Silly Animal Sound. As many moments from the movie are iconic and easily recognizable, a Jaws reference can vary in length from a brief Stock Shout-Out to a Whole Plot Reference.

Not to be confused with "Jaws" First-Person Perspective, which is specifically a video game trope.

Compare: Moby Schtick, Attack of the Killer Whatever, Super-Persistent Predator.

As part of their Hollywood reenactment, Mario, Luigi, and the TF2 Heavy reenact the shark attack scene from Jaws.

As part of their Hollywood reenactment, Mario, Luigi, and the TF2 Heavy reenact the shark attack scene from Jaws.