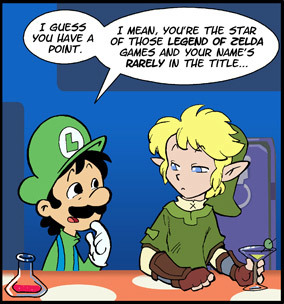 She isn't even in some of them.
"Michael Corleone is The Godfather’s protagonist. The Don gets shot about 40 minutes into the film’s three-hour running time, and while he survives and has a few scenes thereafter, virtually everything memorable about Brando’s performance occurs within the first couple of reels."
— Mike D’Angelo, "In 1972, the Oscar Went to the Right Actor in the Wrong Category"

It's common for a series to be named after one or more of its main characters. Either the series title and the star's name are one and the same (as in Jane Eyre and Indiana Jones) or the names of more than one protagonist will appear in the title (as in Romeo and Juliet and Tom and Jerry). Occasionally, though, the title comes from the name of a character who is not the main protagonist, which may cause some confusion about who's who. Usually, this character is pivotal to the plot or sets the story in motion. It still can cause confusion, especially when the actor playing the protagonist is billed directly above the title.

This trope sometimes leads to I Am Not Shazam, when people think the title is the protagonist's name. On the other hand, when the eponymous secondary character is mistaken for the protagonist, someone has committed the Protagonist Title Fallacy. Often takes the form of P.O.V. Boy, Poster Girl, especially in Japanese media.

Sub-Trope of Character Title. Compare Villain-Based Franchise, Antagonist Title, Supporting Protagonist, and Deuteragonist. May overlap with Trivial Title if the secondary character is especially unimportant to the story.